skip to main | skip to sidebar

We are now at a transitional time in American history. Do we want to keep America as a nation of hard work and self reliance or become a nation of people dependent on government. If that happens we will all be slaves in a sense. We will have government over the people instead of government for the people and by the people. Will America continue to take a leadership role in the world or will we become afraid of asserting ourselves?
Voting is no longer enough. We must all do far more than that to save our country. There are a crucial two years ahead of us as we try to defeat the tragedy of Obamunism. These are TEA PARTY TIMES.

This blog has now been re-activated although I will continue to publish the e-newsletter TEA PARTY TIMES. Let me know if you want to be on that free mailing list.

As of today there are two conservatives in the race for the Republican nomination...Gingrich and Santorum. That's right, Im not counting Mittbama. The only reason Romney has been doing as well as it seems is because the conservatives are splitting the enthusiasm and the vote in the primary contests. One of these two patriots must drop out at some point to give conservatives a chance at defeating Romney. If Romney wins then the Tea Party will have failed in its major mission and we should be very upset if that happens. Today is the last day of the CPAC conference in Washington and Sarah Palin will be the major speaker today. There is all types of specualtion as to what she may do regarding endorsements. Its clear that Romney has little TP support....about 17 - 20 % it appears. I think it should be less than that!
Posted by freeman at 4:30 AM 1 comment:

It's been just 7 weeks since I founded the Claverack Tea Party. But I soon found that f0lks from other towns in our great county wanted in. At first I resisited wanting to keep it very local but now I'm pumped at allthe energy out there in our county. We've been averaging about four new sympathizers for each week of our existence. The goal of course is to have a Tea Party voting block that can turn a local election one way or another and I include State Assembly in the term "local". But there is no reason that one county especially if coordinating with an active Tea Party group in a neighboring county can't turn the tide in congressional elections as well.

If you've found your way to this site please come back and visit. You may also decide to join us or convince others too if you are already involved. Very soon we will have an e-newsletter called Our Town Too to counter the liberal vantage point of our local mag "Our Town". Thank you again.

Ed Fertik
Posted by freeman at 3:22 PM No comments:

This is now the official page of the Claverack Tea Party in Columbia County New York. It's only been about two weeks since I decided to start this group and I'm getting about one call or e-mail every day. Americas glue are towns just like Claverack and we plan to save America one town at a time from Obamunism. Many thanks to founding members Vince Wallace, Ted Filli, Maryanne Lee, John Lee, Charlie Schram, Catherine Moore and Matt Torrey. I'm told the town of Ghent is doing the same thing that we are. Small town politicians can no longer tell us that the big isses don't matter in our town. We DO care how these people stand on abortion, Israel, excessive taxation, and a host of other national issues because small town politicians want to become our state assembly people ad our congressional leaders. Why give hem a start if they don't have good old fashioned American values? So if you want to help save the great country you grew up in send me, Ed Fertik a message at CYCLELOGICAL@AOL.COM.
Posted by freeman at 1:51 PM No comments:

You've got to wonder why Eric Holder is so intent on civilian courts for terrorists and reading them Miranda rights even when it's obvious to anyone that there is no public support for this except on the left. Didn't the Massachusetts, Virginia and New Jersey upsets send some sort of message to this administration? Are they just dense, or is there some hidden agenda. The answer is yes....there is a hidden agenda and it's their effort to try Bush and Cheney for "war crimes" or at least label them as such, and if Holder and the far left want to try and pull that off they are one very stupid and two, they must also attempt to set themselves apart from the Bush Administrations way of doing things. How dare the Bushies treat these poor criminals as terrorist mass murderers ! Simply put Holder must do things the stupid unpopular (easy for him) way rather than the way the public prefers to get at the Bushies. The crew in this administration may be going down but they want to get to their enemies list first and the far left is now basically a political Kamikaze machine pushing these willing Marxists along.
Posted by freeman at 3:45 PM No comments:

Labels: Eric Holder: Is he sane?

Happy Hanukkah and Merry Christmas to all my imaginary followers! I was thinking about the biggest story of 2009 when the recent cover of National Geographic magazine came into view. It was bold for a main stream magazine to propose the question which would have led to ridicule just a decade ago. They meant of course are we alone in the universe and the answer I'm certain is no, we are not alone and our government knows it.
We have already proven that man can travel in space, that there is water elsewhere and recently over 400 new planets have been observed and analyzed using scientific equipment not available, to us, earlier. I asked a woman in her late twenties who worked for the National Institute of Health and is involved in bio-genetics if there could be intelligent life elsewhere and she responded, "it's mathmatically impossible that there isn't". The question of course to many is if so can they or did they come here ever. Even Columbus made log entries on his way to the new world indicative of UFOs and a number of the original 7 astronauts, now old, have reported sightings during their missions. This is not to mention the tens of thousands of credible sightings by intelligent and normal people, civilians, military, pilots and even Jimmuy Carter.......ugh. Too bad the government is so uptight about this and became sucessful at making the subject taboo in polite conversation. Maybe the truth will come out finally in 2010.
Posted by freeman at 3:19 AM No comments:

I've always enjoyed a good read but until yesterday the last book that really inspired me in some fashion was the best seller, "It's not about the Bike" by Lance Armstrong. Then my copy of Sarah Palins book arrived in the mail. I'm only 50 pages into it but it's a great read because it made me feel from my gut that this woman knows what America has been and should continue to be. Just 50 pages made me feel good about America and pumped up to know that we finally have a leader who finds it easy to be honest, easy to love her country, and easy to express herself to regular folks. At the same time I'm feeling a bit down on the Republican establishment which in my opinion is not jumping on this chance. Palin, or may I say Sarah, does not need pros to tell her what her opinion should be or how to become popular. She knows and she is and its oh so natural. I don't expect her to do anything but keep climbing the ladder after her book tour and those of us who her smart will help this storm develop and sweep her in to the White House.
Posted by freeman at 5:47 PM No comments:

We all remember how Bush took so much heat from the left wing talking heads during Katrina. Now we have the Obama administration mismanaging the flu crisis. So many vaccinations promised and so few delivered. And these are the folks who want our health care to be government controlled. Well......we're getting a first hand glimpse of how that would go HUH? The death toll now from swine flu is 4000 in America. In a few more weeks or months the death toll from swine flu in America will exceed the total number of military killed in Iraq ! Will the media get on Obamas case about this? NO !

Skipping to another topic........I'm enjoying the frenzy in the leftist media about Palin. The trash Palin effort is shifting to high gear again now that she is on tour and selling her book faster than pizza in New York City. I laughed when CNN tried to turn some poll figures into a negative since ONLY one third of the country feels she should be president. Are you kidding? She isn't even a candidate and is not campaigning (in the ture sense) and she ALREADY has one third of the country behind her. WOW! How would Nancy Pelosi do comapred to that. And I'm waiting for the poll that will pit Palin against Obama in a national election held today. I bet she would have a very strong showing if not actually beating the messiah.
Posted by freeman at 5:21 AM No comments: 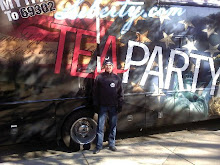